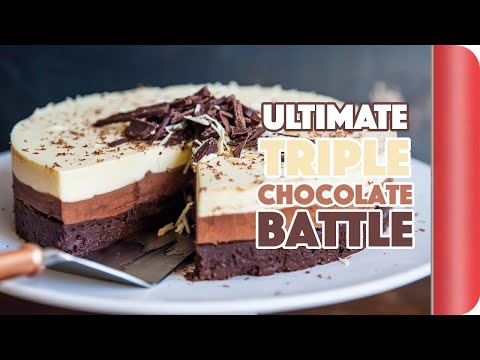 : Welcome to the chocolate battle. This week, they’re all cooking exactly the same recipe. We’ve stripped the recipe back to its fair instruction but they’ve got the same ingredients and the same amount of time, two hours. James and I will be judging whatever they put into the fridge at the end of the two hours. : Are you ready? : Yea. : You made it sound like a really difficult thing. : We’re not looking for creativity or originality, this is all about skill. : You’re stuffed, mate. : Let’s do it. : I’ve got all the skills. : By the way, we’re making a chocolate mousse cake.

(orchestral music) : So, this is one of your recipes, James? : It is, yes. : This is the one you’ve constructed the control, and this is what they’re aiming for. Three distinct layers white chocolate mousse, dark chocolate mousse, and a dark chocolate flourless base. : Yes. So, they have a full recipe for this but we have taken out some of the details. They’ve got all the ingredients that they need, and we’re looking for perfect layers. A nice, moist base and some nice white mousse layers. : Well the first thing I’m going to do is I’m gonna put my cream back in the fridge because if it comes to room temperature, its structural integrity might change and therefore, I gonna whip it to stiff peaks later on. : I’m going to read the recipe all the way through twice, so I know what’s happening.

: I’m screwed. : Are you preheating oven? : Mate, you’re not going near my oven. : It’s a mousse cake. Why are you—why is it the oven? : I don’t know, or is it an actual mousse? : That roast mousse. : Yeah, a roast mousse cake. : So the first thing the instructions say is to heat brown sugar, caster sugar, water, and vanilla extract into a pan until the sugars dissolved. Then we add some butter. : All of that butter? Are you sure? This is a healthy base. : Mix in. : Oh no. Oh no. Ohhhh… no. I’ve made a terrible mistake already. Why would gelatine be powdered? And look like brown sugar? : Is that what you’ve done? : Am I allowed to add a new set of ingredients? Right.

Oh, this is going to put me so far behind. : Go measure out yourself. There are no egg whites in the mousse? What’s on mousse is that? : What are you—? : That was hot, wasn’t it? : Pour the hot liquid over the dark chocolate in a new bowl to melt. This is a new bowl. So, the next step is to mix four beaten eggs into our slightly cooled chocolate mixture. Now, slightly cold is ambiguous. I assumed that by putting this into this pot, it’s going to cook the eggs Which is why I want to cool it, but I don’t know how cool it needs to be to stop the eggs from scrambling.

: Kadoosh. Too big. : Now, before you say anything, I do know there’s another way of doing this, it’s just that I think this way can be more accurate. : Because it’s going to a bain-marie, which is filling a dish half with water in the oven, you want to wrap that springform tin really, really well in foil, because the last thing you want is that water getting into the cake. : So I’ve got to seal the base with tin foil. Now interestingly, if you’ve bought any decent springform cake tin, you won’t need to seal the base because they should be sealed already. Let’s see about these ones. : The thing is, Jamie’s a bit of a headache. This is how he wraps presents. : I pushed down too hard. : I’m gonna trust that. : Okay, now the beaten eggs are going into the chocolate. : I’m going into my pan.

I’ve made a cartouche in my pan, and then sealed it in as much tin foil as it seems environmentally-friendly. And now, I’m going to pour my whole mixture to here and really hope this doesn’t leak. I’m going to put this thing into an oven for 30 minutes. : Do you know, what I like about this recipe is that although it’s challenging, it’s quite simple, and it’s full of things that they’ve all done before. : They have done it all before, even cooking the bain-marie. They just need to recall those moments. : This is gelatine. Not sugar. Pro tip. You’ve got to bloom it. Bloom the gelatine. Right. You know what blooming the gelatine means. You are lying. This is what happens when you give Ben a little bit of control. : So when the gelatine cheat, you just chuck it in water and then you leave it, and then you squeeze it out. : Yeah. : Divide a third of the cream between the two chocolate mixtures and mix it.

: Yep. : Divide the remaining cream between the chocolate mixtures and carefully fold it in. Pour the dark chocolate layer over the cool base and leave to set before adding the white chocolate layer. : What are you doing? : That’s my hob. : No, it’s not. That’s— : You’re doing this, mate, because it’s really starting to stick and bubble. I mean, that’s scrambled egg now. : How is that gonna be scrambled egg? : You’re making pancakes.

: You’re making pancakes. Look at how bloomed that is. Pour half into the broken dark chocolate and half into the white. I’m gonna do the other way around. That felt like half-and-half. 240 milliliters of cream. : What are you measuring? : We’re supposed to split—you’re supposed to halve this mixture. So I’m going to make it perfect in half.

: Chances are at least one of us is gonna be screwed by the water. : Yeah. There is no point looking at it in the oven because I’ve got no idea what I’m looking for, so I don’t know whether this is good or bad. Especially if it’s waterlogged, that’s bad. That’s the only thing I know. : Three. Two. One. Activate. Get it out. Get it out. : Can you get mine now? : Oh, it’s up steaming. : I hate this tap. : Is the water bubbly or…? : Maybe. That was a wet nappy. I mean, how could I see that any better? : So warm.

And hey, it’ll be the learning curve for the next chocolate mousse cake that I make because I’m definitely going to do this again. On reflection, I think I’ve done the wrong thing. : Well, I’m doing it other way. : He’s doing it. He’s doing it! He’s doing it—oh, I’m gonna (unintelligible) So warm. So warm. Jamie]: You’ve got massive hole in the top. : Yeah, I put my finger in the (unintelligible). : Is the middle of your cake supposed to sink down? Ah.

: I’m impressed. I’ve gotta say that. : What I like is how even the layers are. So, we saw you weighing out the different steps Back fired a little bit, ’cause your chocolate didn’t melt, your cream cooled down, but you corrected that with the heat. So, smart. And the feathering. : I’ve no idea what you’re doing there until the final moment. : In there, you can just about see those bubbles. Moving along to Barry’s, a much more dangerous slice. : I’d say that there in more texture is my base. : The texture could be the cartouche which you’ve left on here. I mean, that’s not the smartest move. : So I did right! : I try and get it rid of that. : You’re on the bottom of my slice.

You got it off my slice. : And finally, the star on the end. : There we go. : That’s just… you know, the cheesecake one. It’s a Jamie-sized portion. : You haven’t got the exact same ratio between white chocolate and dark chocolate mousse. : But the layers—the layers are very defining. Again, very good. The white chocolate top is a little bit less moussy. : The chocolate starfish.. : I don’t like it. That leaves me speechless. : Thank you. : We need to confer. : You guys could just… For a moment. I mean, we see a lot of obvious good things about this one, and this is not quite right. I’ve got to give him credit for how he took it out of the tin. It sounds like the dark horse of the recipe. Really difficult. : That wasn’t easy. : So, have you made your mind up? : Yes. : I’m nervous. : Okay, so two judges, two brownie points up for grabs. This first brownie point goes to somebody who followed the recipe to the tee.

He used accuracy, finish with creativity, and the layers are perfect. it’s him. Mike. : Yes! : Second brownie point… : Hold hands. : Yep. : …is going to the person who persevered right to the very end. gushed parchment paper off… : Yeah! : and… and has great definition in the layers. And got away with the fact that he measured absolutely nothing. : But it was so close. And as you said, we win because we all get cake, and you guys get a vote too, so comment on the poll on Youtube. You can find the recipe. Theyr’e available downstairs. : You cooked no cake. : I did not cake today. I just did ate four. : Well, that was highly enjoyable. : Was it? : Wasn’t it? : No. : Should we see what it’s done to the brownie leaderboard? o be happy oh : Do we have…? – Oooh. : Yeah, this is about what I expected. So, if you want more of the FridgeCamp then make sure you subscribe to SORTEDFood. : And if you enjoyed the videos, then make sure you like the video. : You can also ring that little bell thing.

: Remember to join us 10 o’clock, Monday morning for a brand new week, with a brand new theme. – Click on the left if you’ve missed our last video, or click on the right video for one of our favorites. .