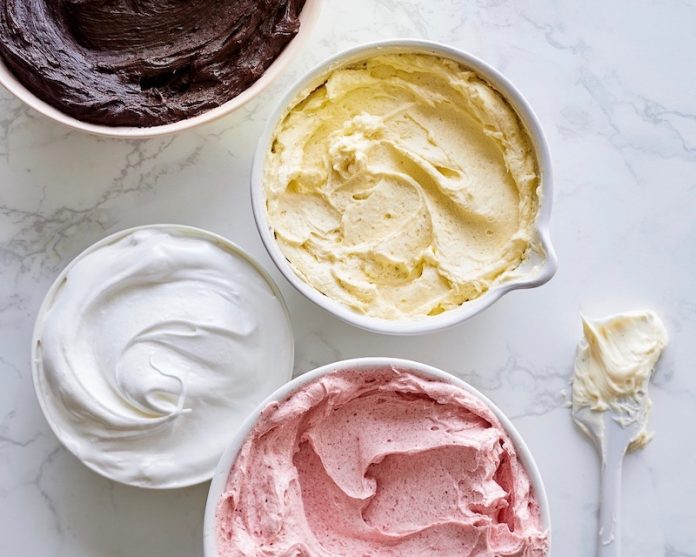 When it comes to frosting, buttercream is a baker’s best friend. Rich, creamy, and sugary, it’s silk on the tongue, yet stiff enough to hold. It’s the structural “glue” that holds your sweet masterpiece together and the finishing touch that makes it look artful. There are numerous styles of buttercream, but here, we cover three of the most important: American Swiss meringue and German. A master vanilla bean cake, twirled up with various stir-ins, pairs beautifully with each frosting. Read on for incisive tips, visual tutorials and incredible layer cake-frosting combos and designs that will have you dreaming of piping and swirling. 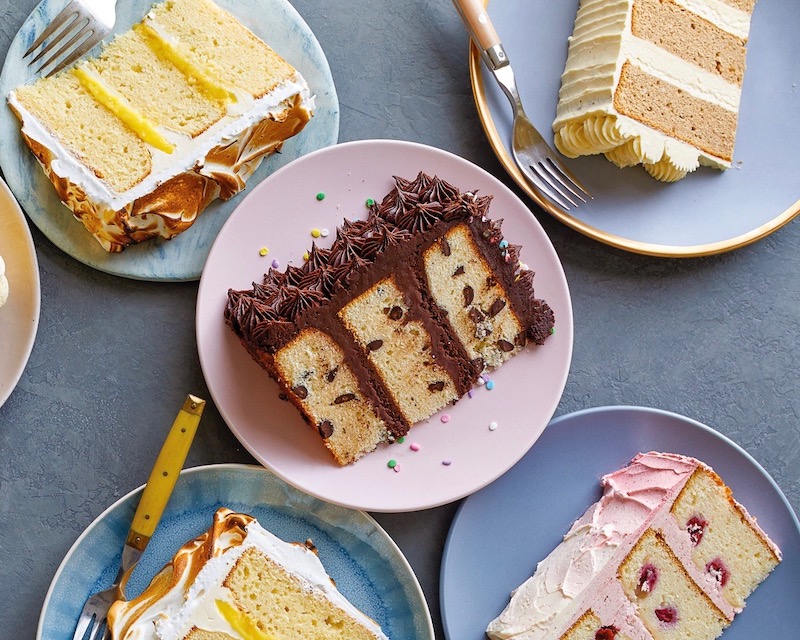 USE ROOM TEMPERATURE INGREDIENTS. Eggs will whip up better, and additional flavoring ingredients will maintain the texture of the finished buttercream.

PAY ATTENTION TO YOUR BUTTER. It should be soft enough to break off pieces, but not overly greasy on the exterior. If it’s too soft, butter is more likely to curdle and separate when being incorporated. However, if your butter is too cold, your mixture will look lumpy. To fix this, remove about ½ cup of the buttercream and microwave in 10-second intervals until warm. Add back to the mixer bowl, and whip to combine. The warmth should help the butter to incorporate.

ALAS, SEPARATION HAPPENS. Swiss meringue and German buttercream can look separated, soupy, or curdled during the mixing process. If this happens to you, don’t fret. Continued vigorous mixing usually solves this, so continue to add in all the butter and then leave the mixer going for a few minutes to let it come together.

STORE IT RIGHT. Buttercream can be made ahead and refrigerated for up to 1 week in an airtight container. Let it come to room temperature and briefly rewhip before using. 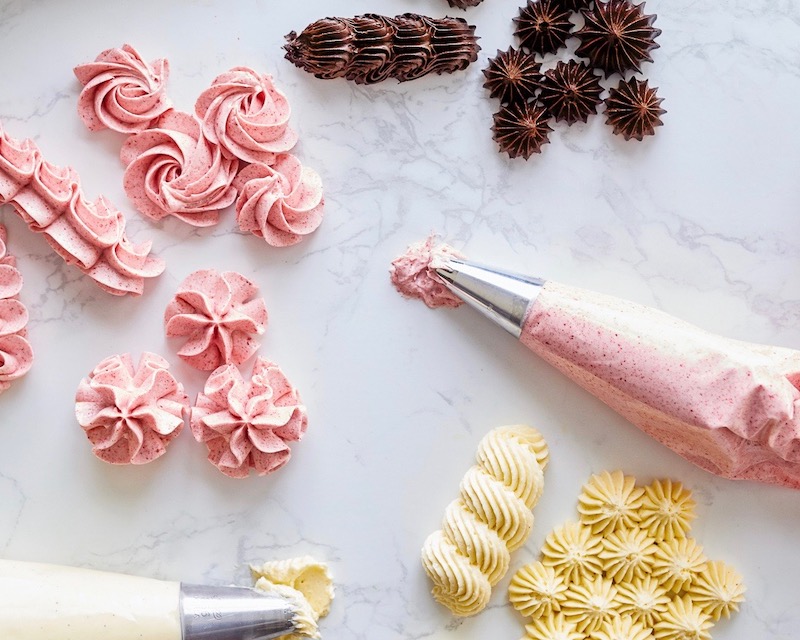 With my go-to piping tips, the French star tip and the open star tip, you can create a wide range of frosting finishes. When piping frosting, do not fill the piping bag more than halfway. Hold the top of the bag in your dominant hand—this will be your squeezing hand—and let your nondominant hand steer the bag. Get multiple tips in the same size so you don’t have to switch out tips if piping different colors.

OPEN STAR TIP (such as Wilton 1M) is perfect for piped borders, rosettes, and ruffled points on top of cakes. (Pink frosting pictured above.)

FRENCH STAR TIP (such as Ateco #866) is great for stars and shell borders. (Cream colored frosting pictured above.) 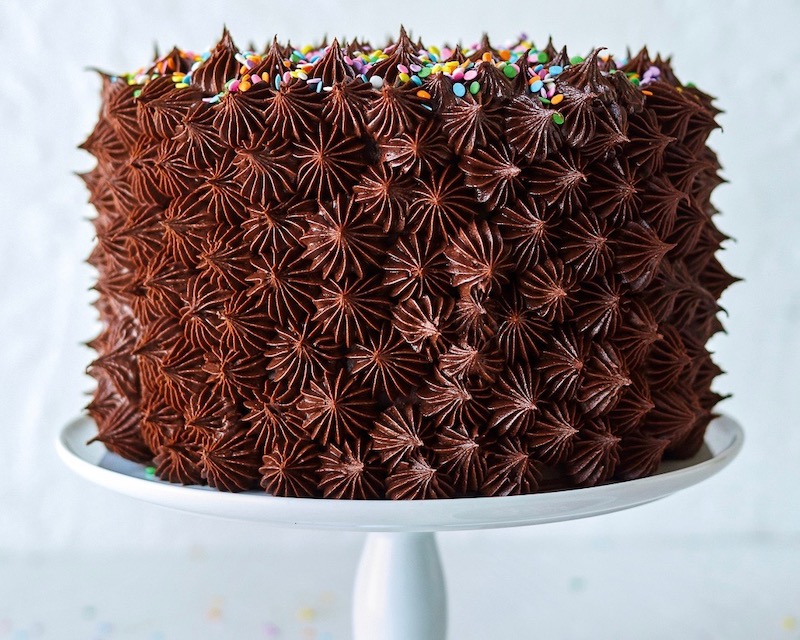 Probably the easiest buttercream to master, American buttercream is made by creaming butter with confectioners’ sugar until the mixture is spreadable. Cream or milk help give it a silky texture, but it’s still firmer and thicker than most other buttercreams. American buttercream doesn’t hold up very well in warmer temperatures and is best used on the day it is made. If you are not working with it, place a piece of plastic wrap directly against the surface to prevent a crust from forming.

Using a French star tip to do a finish such as this one is one of my favorite ways to finish a cake. Starting at the top of the cake, begin adding little stars of frosting to cover the surface. 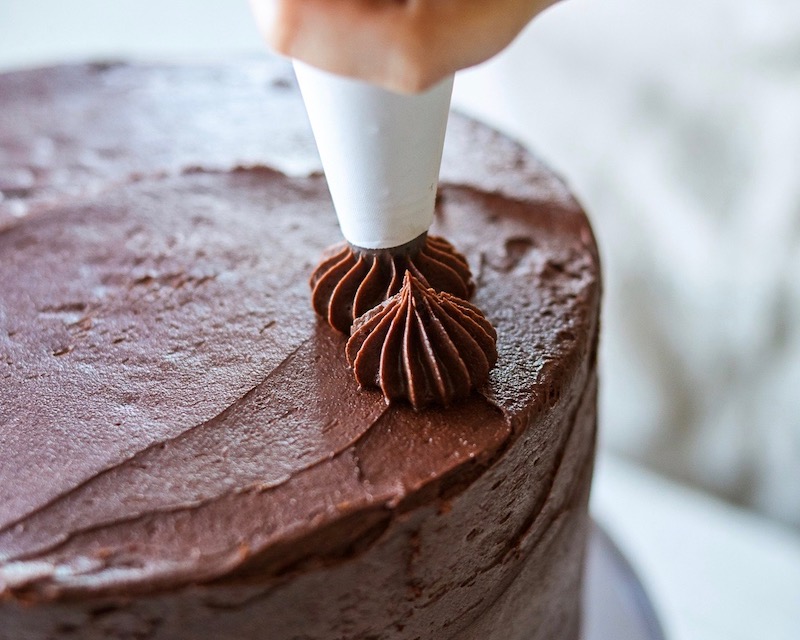 Hold the piping bag directly above where you want to apply the buttercream, and squeeze gently to release it. Stop applying pressure to the bag once your star is almost finished, and pull away quickly so the frosting comes to a nice closed point at the top. 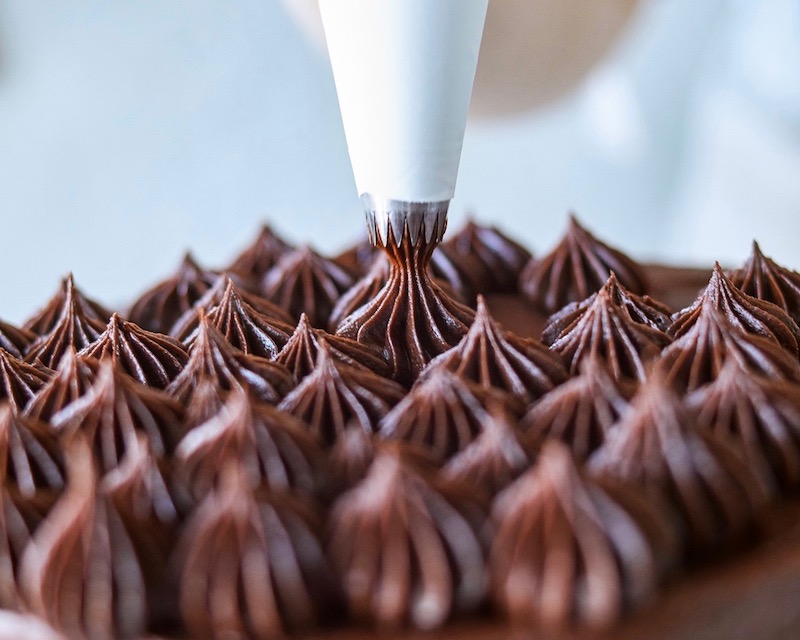 Move onto the sides of the cake. I find it less time-consuming to apply the stars ½ inch apart at first and then go back to fill in the smooth space with more until the entire cake is covered. 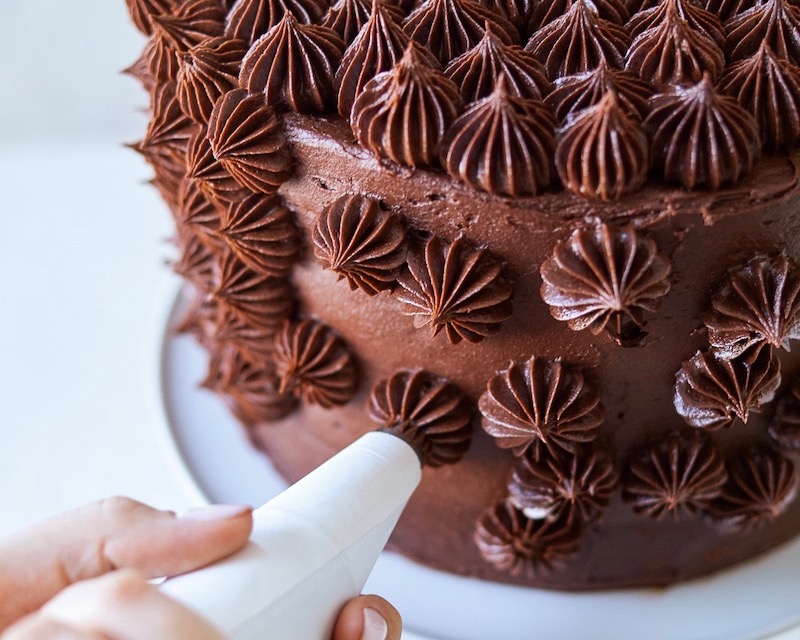 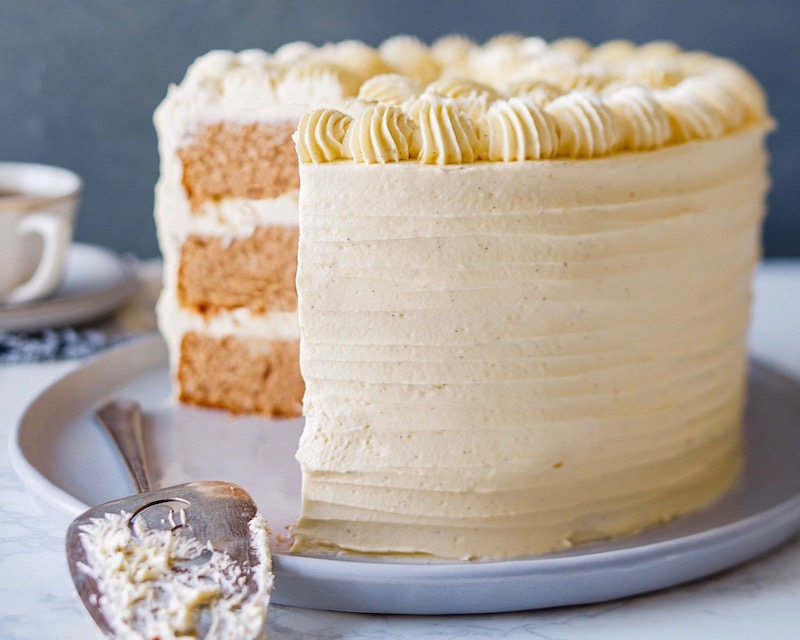 This lesser-known style of buttercream has a gorgeous yellow tint and is softer than most and especially light in texture and taste. Because you start with pastry cream, it’s easy to infuse the milk with a variety of flavors, like tea, coffee, or herbs.

PRO TIP: Make sure that you leave enough time for the pastry cream in the German buttercream to cool. You can do this by making it in advance (up to 2 days), or cool it quickly by placing it in a shallow dish or rimmed baking sheet, pressing plastic wrap directly onto the surface, and then refrigerating it, stirring occasionally. The larger surface area will help it cool more quickly. Alternatively, you can place the bowl of pastry cream in an ice bath and stir occasionally until cool.

Ring Around the Layer Cake

Start on the outermost edge of the cake and pipe a shell design. Hold tip at an angle, with the tip pointing toward the middle. Using even pressure on piping bag, form a shell shape by making a smooth motion with your wrist to pipe buttercream toward outer edge and then back toward the center on itself as you release pressure. 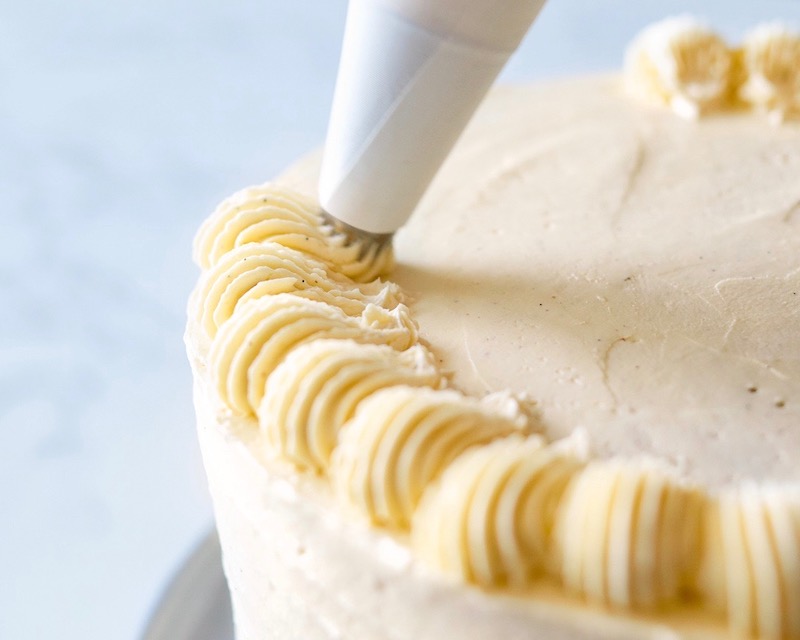 Create a ring of smaller stars piped directly in front of each piped shell on the outer edge. Hold your piping bag straight up and down above the cake, and gently apply pressure to pipe. Finish by releasing your grip and pulling up slightly. 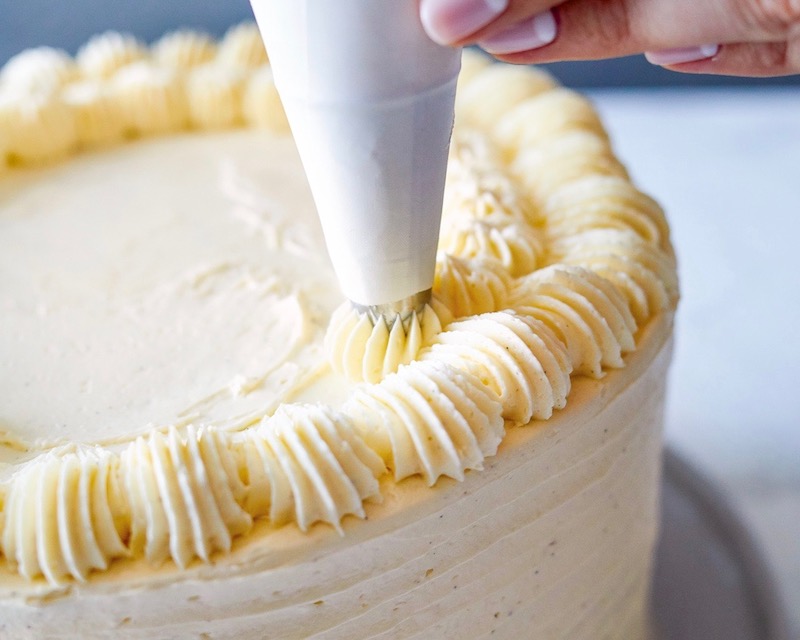 Hold piping tip at an angle, with tip pointing down. Form a shell shape by piping the buttercream up and over onto itself and then giving it a little tail. Finish the shape by releasing your grip on the piping bag. Pipe the following shell over the end of the previous one to give it a seamless finish. 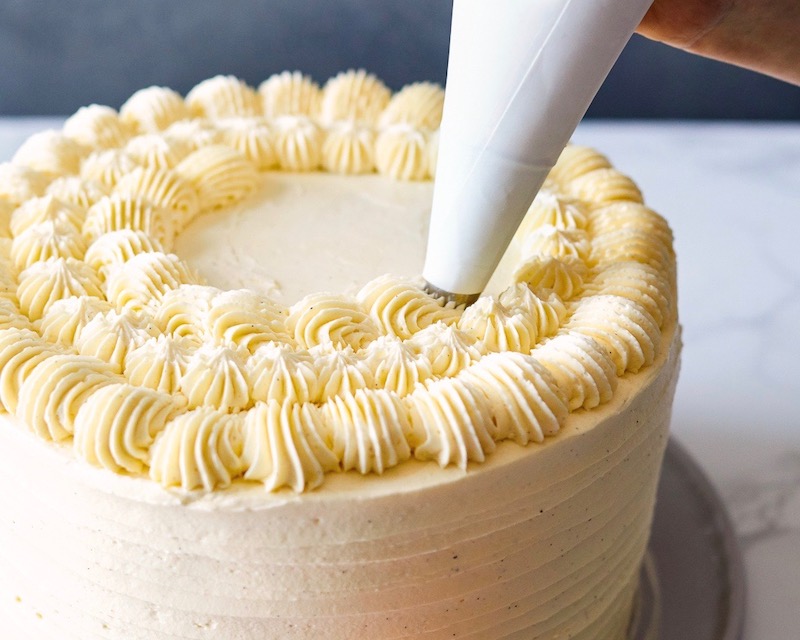 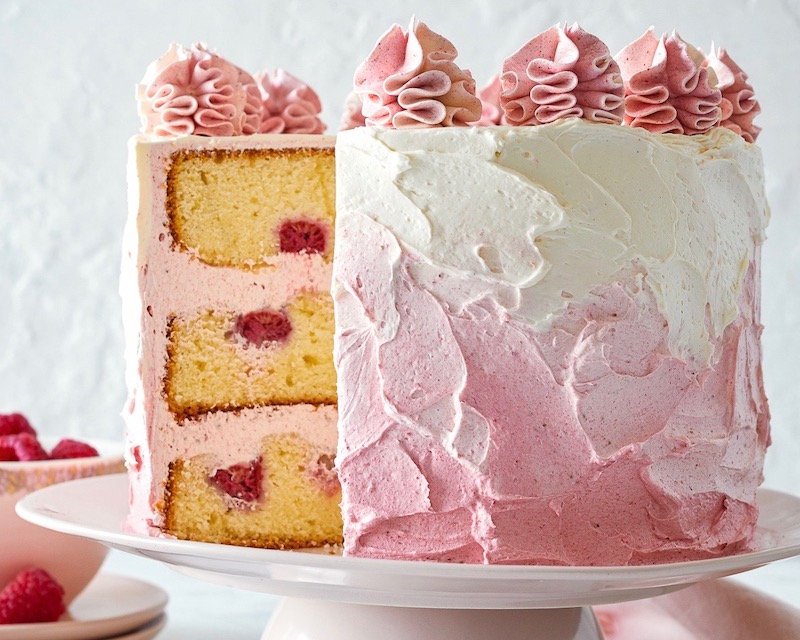 Swiss meringue buttercream is quick and easy to make, holds up well in warmer temperatures, and is best for piping intricate frosting designs. Because of its light texture, this style is great for building and frosting layer cakes. It’s also whiter than other styles, so it’s the best option if you’re adding color to your frosting. 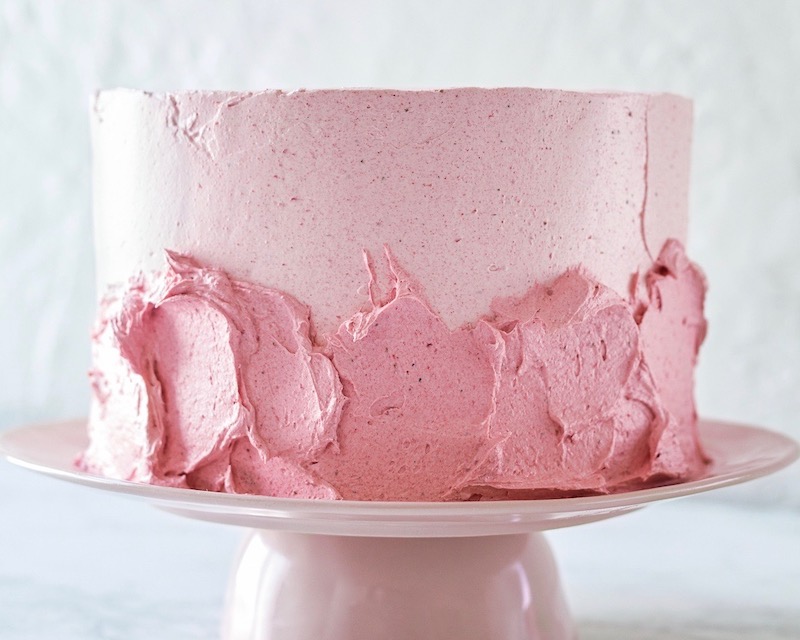 Then coat the middle with the light pink Swiss meringue buttercream, and the top one-third and top of the cake with the reserved white buttercream. 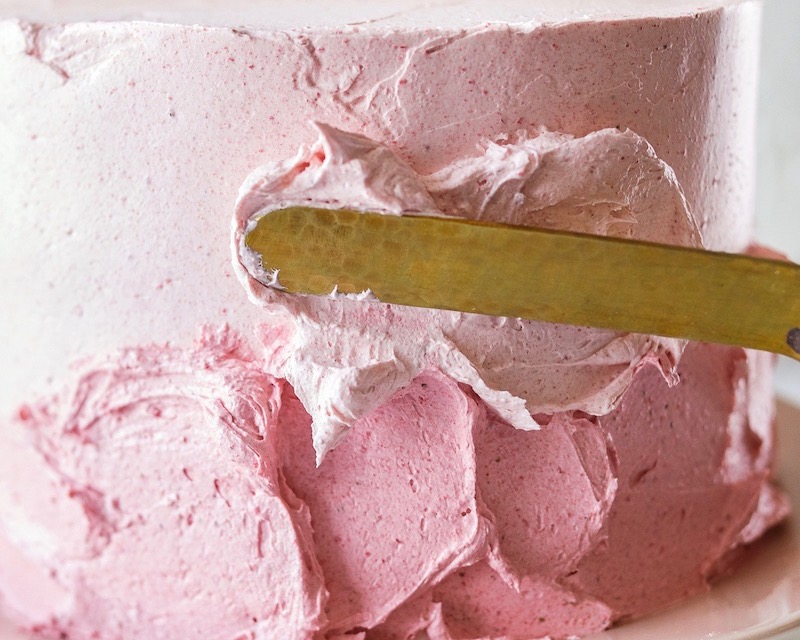 Do a few passes with a cake scraper to blend the colors, adding more buttercream where needed to help blend and fill in any patches. Use a clean offset spatula to create swoops and swirls on the side of the cake to give texture. 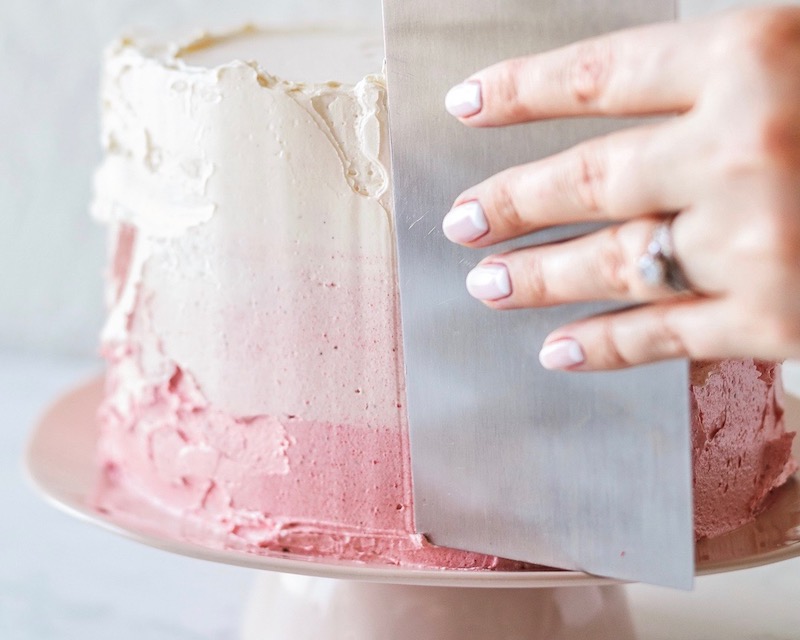 PRO TIP: When you pipe frosting on the top of the cake, fill the piping bag with the remaining pink and white frosting. This will create a pretty two-tone effect on each ruffle. Hold your piping bag directly over the top of the cake, and pipe around the perimeter. No need to move your hand to create the swirl effect as you pipe—the star tip will create the ruffles for you.