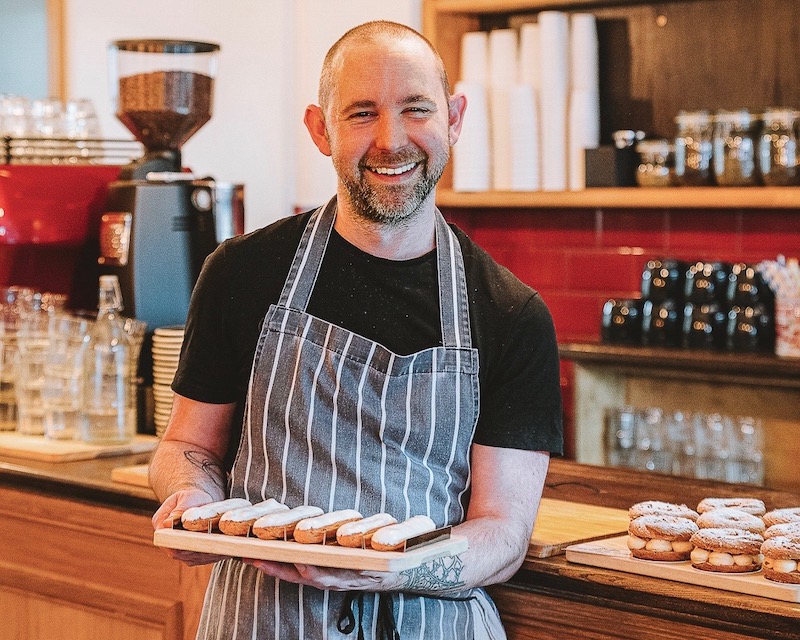 During our trip to Ireland earlier this year, we stumbled across a French bakery in Belfast called Lazy Claire Patisserie, and what a surprise it was to learn that the owner, Daniel Duckett, was born and raised in Alabama in the same city where Bake from Scratch is headquartered! From canelés to éclairs to Paris-Brest, Daniel has been serving traditional French pastry to the people of Belfast since 2018. We had the pleasure of interviewing Daniel to learn more about how he came to open a French pâtisserie and what it’s like owning a bakery in Northern Ireland!

When did you first start baking? What was the first thing you baked from scratch?

Honestly, I can’t remember how old I was when I first started baking! From an extremely early age, I was in the kitchen with either my mom or grandmother. We made cookies of some sort for Christmas. I distinctly remember Hershey’s Kiss cookies being very popular at our family gatherings, but I think the first thing I baked from scratch all by myself was peanut butter cookies.

You were born and raised in Alabama. What made you want to move abroad?

When I was around 10, I had a book with ways to say “please” and “thank you” in other languages, and for some reason, the French one stuck out. From then on, I wanted to learn French and fell in love with all things France. I learned loads of French while I was at Huntingdon College in Montgomery, Alabama, with the most amazing professor, Camille Elebash-Hill. But interestingly, when I was in Paris on vacation in 2008, I met an Irish man named Patrick O’Reilly—yes stereotypical, I know! I moved to Belfast in 2009, and we were married very shortly after.

What has been the biggest culture shock, living as an Alabamian in Belfast?

Walking. Everywhere. When I first moved here, I was completely used to driving constantly. In Birmingham, it is nearly impossible to walk from your house to downtown without nearly getting killed on University Boulevard! But in Belfast, so many people walk everywhere, and Patrick is an amazing walker, so it was very hard to keep up! I have definitely gotten used to walking all the time, but I still prefer to drive or cycle because I’m impatient and have to get places quickly.

What made you decide to open a French bakery in Belfast? Tell us a little bit about the process of opening a bakery in Ireland—things you learned along the way and some of your proudest moments as an expat bakery owner.

When we moved to Paris in 2012, I was very determined to work in a pâtisserie and got the opportunity to learn so much at the famous Angelina tearoom and pâtisserie just across from the Louvre Museum. While that sounds glamorous (it was—I saw Karl Lagerfeld one day!), it was also a lot of very hard work. But the precision and attention to detail was something I fell in love with.

We had already planned to move back to Belfast in 2013, so I started working on my business plan, which took a very long time and a lot of refining. Belfast hasn’t had a really proper French pâtisserie in a long time, and I knew that, because people here love dessert, pastry would be a hit.

In 2018, I completely renovated the space we are in now from an empty shell to a warm and inviting space. I’ve never owned a business before, so I learned how to be an owner, manager, HR specialist, designer, and marketing manager!

Most importantly, I’ve learned there are no problems, only solutions. There’s always an answer to any challenge I’ve faced; sometimes, it might be a difficult one, but the business always comes first, and it’s paid off.

My proudest moment was the day I was named in the Top 10 Pastry Chefs in Ireland by Food & Wine Magazine. We had been in business little more than a year, and it was such an honour to be recognised for such a great title.

What’s your favorite thing about owning a bakery in Ireland? What do you find so special about using Irish ingredients and serving the Irish people amazing food?

I absolutely love seeing people’s faces when they eat one of our pastries for the first time. Knowing I have helped create an amazing experience for our customers is probably the one of the best feelings of owning my own bakery. When I see someone find a new favourite pastry and then go back for something to take home, I know I’ve made a lasting impression and that’s what being a pastry chef is all about!

Irish milk and butter are one of a kind, probably because the cows are fed with plenty of grass that’s always green due to our unique climate. I have always loved a glass of cold milk, so I love what we get here, and because the butter comes from that same milk, of course it tastes amazing, too! I think that’s what makes our croissants and pastries really special.

Serving the Irish people amazing food is a real pleasure because they’re so loyal to small businesses. We have so many regulars, and we’ve gotten to know them so well over the past couple of years that they are more like family. Being based outside the city centre, we draw in a lot of our neighbours but have also seen lots of new faces. Our bakery provides a great space for people to catch up, and having a wide window into the kitchen not only allows them to see what we’re baking but also lets me chat with our customers.

What’s the story behind the name Lazy Claire Patisserie?

This is definitely something I’ve had to explain to many of our customers! When you translate “the éclairs” into French it sounds just like “Lazy Claire,” so I thought that was the perfect name. It provides a talking point and helps us explain a little about the history of the pâtisserie. And it’s fun!

Describe your approach to French pâtisserie. Do you incorporate Irish cuisine into your goods?

When I was coming up with my business idea and products, I wanted to stick to traditional French pastries as much as possible. Traditional bakeries are still going strong here and many folks don’t experiment too much with flavours, so I knew we would offer some familiar flavours. Even introducing the canelé (a traditional pastry from Bordeaux) to the people of Belfast took me offering them for free so people could get a taste. But I will say they have really proven popular!

I haven’t really experimented with Irish cuisine in our pastries yet! But we do use locally sourced Summerhill honey from the bees that pollinate the apple trees that are mainly used in Irish cider. It is an amazing flavour and has proven popular with our customers, so we stock that for sale as well.

I do have a throwback to the South, though, this summer! Because we used to go to Panama City Beach, Florida, nearly every summer, I used to eat Key lime pie all the time. So, this year, I decided to make a special Key lime pie éclair, which is a link to the Gulf Coast!

Favorite baking ingredient or product you can’t live without?

I think, apart from butter, which is already one of my favourites, vanilla would have to be a very close second. We use so much real vanilla, but I wouldn’t substitute it with anything else, because it adds such a great flavour. Whether it’s in a cream sandwiched in between caramelised puff pastry in our mille-feuille or used as a secondary note in our homemade hot chocolate, those little grains of vanilla are such a powerful flavour.

If you had to choose, what’s your favourite thing to serve at the bakery? And what do you enjoy baking just for yourself?

My favourite things to serve at our bakery is the Paris-Brazil. It’s based on the classic pastry, a Paris-Brest, which is flavoured with hazelnut praline cream inside a ring of choux pastry. To the flavour of our homemade praline, we add locally roasted Bailies Coffee, which is the nod to Brazil and its coffee-growing tradition.

I don’t really get many opportunities to bake for myself since I’m so busy in the pâtisserie! But one thing that is really delicious is a bread pudding made with leftover croissants, vanilla, and raisins. The rich, buttery taste from the croissants takes it a step up. Warm from the oven, it’s the best!

Do you have any go-to places, bakeries or restaurants in Ireland for first-time visitors?

Well, obviously, come to Lazy Claire first for a taste of Paris without the additional trip!

I would highly recommend Ursa Minor Bakehouse in Ballycastle on the north coast. They bake lots of different types of breads but also have a good selection of pastries.

If you’re in Dublin, you have to check out Bread 41. They have great sourdough but have also perfected their croissants in many different shapes and styles.

Also in Dublin is Cloud Picker Coffee and their resident baker Aoife Noonan has excellent cakes and bakes made fresh each day.

If you’re looking for great seafood in Belfast, check out Stock Kitchen Bar in St. George’s Market. Chef Danny Millar is one of our regulars, and we can vouch for his creations! They source their fresh fish at the market and work their magic into delicious meals.

Belfast also has three Michelin-starred restaurants—OX, Deanes EIPIC, and the Muddlers Club—so any of those are sure to provide an amazing meal.